The placement of Nekromanteion on a hill at the confluence of Acheron river with its tributaries is associated with the ancient beliefs of the underworld. Chasms, caves and canyons were identified in antiquity with the entrances to the underword, while lakes and rivers which flowed into the ground and continued their course underground, were associated with the path followed by the souls of the dead to Hades.

The dead were regarded by the ancient Greeks as shadows, freed from their corraptible body, capable of predicting the future. At the same time they were characterized by lack of conscience and vindictiviness against the living, so getting in contact with them was not devoid of danger for the living.

The ancient tradition mention many temples and oracles, where guests could communicate with the soul of a loved one to ask information about the future.

The core of the ritual o Nekromanteion of Acheron waw the eastern part of the complex accodring to its excavator Professor S. Dakaris, who was based on archaeological finds and written ancient sources.

Visitors entered from the north entrance of the complex and lived for some times in the rooms adjoining in the courtyard and the northern corridor, where they were subjected to mental and phisical preparations.

In the eastern corridor sacrifices and libations were performed, while in the southern corridor, known as the “Labyrinth”,cereal would be offered. Through the arched gateway the celebrants entered the main hall of the temple where the communication with the dead was deemed to take place.

The city was founded as a symbol of the great victory of Gaius Julius Caesar Octavian and later Roman emperor Augustus against Marco Antonio and Cleopatra VII of Egypt in Aktio in 31 BC. and flourished during the Roman period.

The visitor can browse among impressive mosaic finds and see up close the Roman walls, the Roman theater, the impressive conservatory, the nymphaeum, the Roman baths of Ancient Nikopolis, Roman houses, as well as the place where the famous M of the victory of Augustus in the naval battle of Aktio.

The visitor can also see the influence of Christianity in Nikopolis, learn about the famous Stoic philosopher Acquired and take part in a “magical journey” to the famous city of Nike. 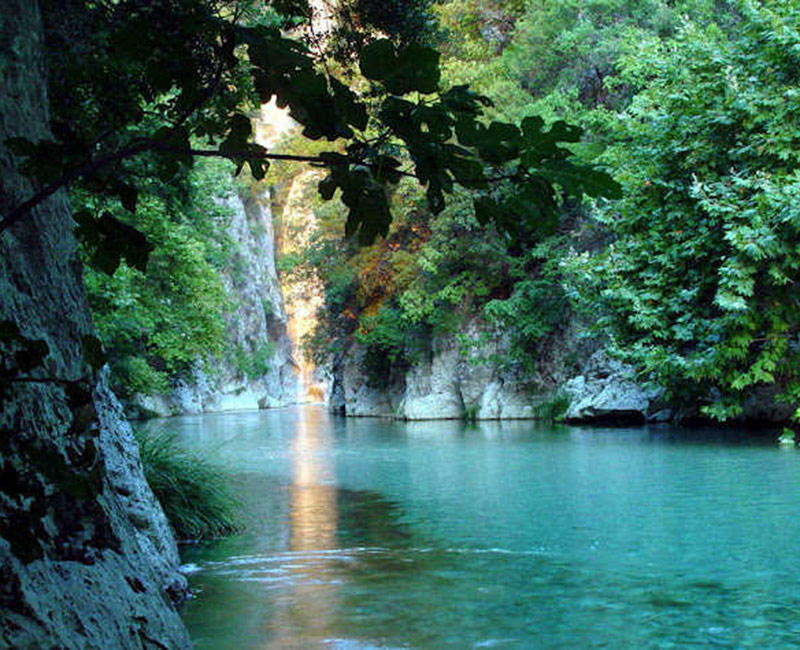 The mythical river of Epirus at your feet – Acherodas river springs from the area known by the name of the village Glyki at an altitude of 1,600 m. in the mountains of Souli and discharges in the area of Ammoudia on the Ionian sea.

On its way, it passes through wonderful gorges, proud and audacious precipices, endless landscapes of peace and handsomeness, and it forms some ponds and lakes here and there; and all that under the surveillance of age-old plane trees. And, of course, the habitat of such a unique place is a member of the Natura 2000 network.

River trekking – Plane trees bending over gurgling fountains seem to be begging for water, exhausted as they are by the load of climbing plants that endure eternity by clinging to the trees’ trunks. Snow white limestone rocks lie on the bed of the river, where thick ferns lounge around. Dominated by nuances of green, exciting paths stretch along the river; at times they cross it, as they tread on arched rocky bridges.

At a certain point the river narrows between green-clad steep high cliffs that seem to be forming an enormous gate through which the water of the river rushes fiercely; no wonder the legendary name of the spot is “The Gate to the Underworld”. Two of the most impressive and stirring trails are Glyki-Skala Tzavelenas and Skala Tzavelenas- the Souli plateau. 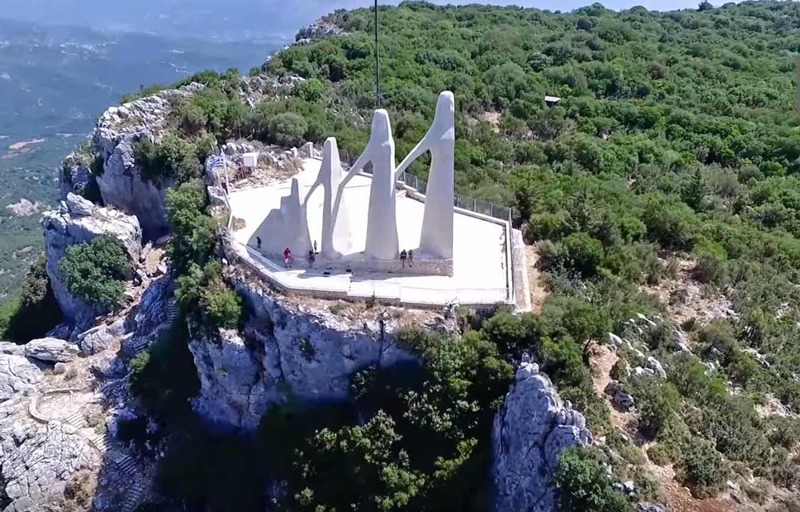 The monumental complex at the top of Mount Zalongo stands haughtily and carries around the world a global message of sacrifice and freedom.

The international symbolism of the sacrifice of women in Zalongo, is a center of interest for historians, writers and politicians around the world, appears in world masterpieces of art and has made Preveza and Souli world famous.

The Monument of Zalongos stands at the top of the homonymous mountain at an altitude of 765 meters. It depicts on a stone base, 4 giant abstract figures of the Souliotissa and has a reference to the sacrifice of Zalongos . In 1803 the Souliotisses (about 60 in number according to historical sources) surrounded in Zalongo by the Ottoman army, preferred to fall with their babies on the cliff and be sacrificed, rather than live a life of captivity and disgrace. According to historical legend, they danced before falling off the cliff, something that was later captured and praised by world literature.

The famous sculptor George Zongolopoulos worked on the construction of the Monument from 1954 to 1960. The inauguration took place on June 11, 1961, in the presence of King Paul, Queen Frederick, the metropolitans of all Epirus and other officials . 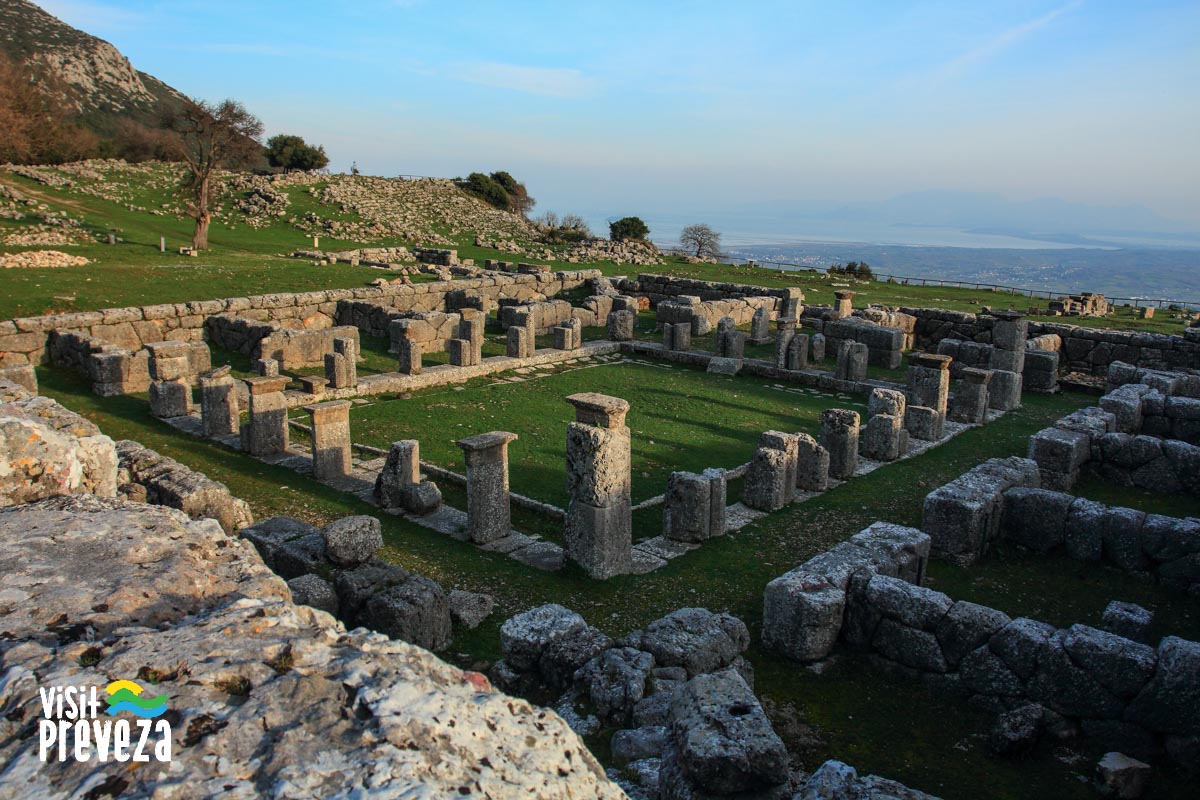 Kassopi is the ancient Greek city with the most beautiful view. A real natural “balcony” where the visitor gets lost in the magic of the diversity of landscapes.

The founders of Ancient Kassopi in the first half of the 4th century BC. carefully chose the location. A naturally fortified location, at an altitude of 650 meters, under the steep cliffs of Mount Zaloggo and oriented to the well-being of the inhabitants.

Kassopi has an impressive ancient architecture, as it is built with the  Hippodameian system and is divided into 20 parallel streets, the “alleys”. The Kassopai, a predominantly continental race, created a great economic and commercial center, which had a political market, a rectory, two theaters, a hostel, temples of worship and its own mint. Especially the great ancient theater of Kassopi is a real work of art. The city was destroyed in 167 BC . by the Romans and was permanently deserted in 31 BC. when the remaining inhabitants were forcibly transferred as settlers of the newly formed by the Romans Ancient Nikopolis.

In the archeological site, which emerges through beautiful clusters of trees, the visitor browses through impressive finds of antiquity, which are preserved in excellent condition, always having an amazing view.

From the few ancient cities, where the visitor can really feel what life was like in the ancient world. 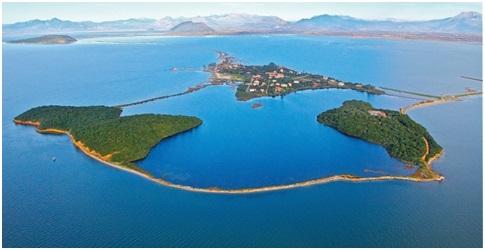 The Amvrakikos Gulf is one of the national parks of Greece, of incomparable beauty and importance that is protected by domestic and community legislation.

Hundreds of species of flora and fauna of the highest environmental importance, beautiful colors in the waters per region, historical and cultural value, scattered monuments, cities and villages spread over three regional units, compose an ecosystem that should be an experience for every visitor of the Prefecture.

A bay that is something like a lagoon, a unique condition in the Balkans and Europe.

A special experience is the view of the dolphins in the Amvrakikos Gulf, but also the tasting of the rich gastronomy that derives from it, with the trademark of the famous shrimp or the Greek “caviar”, the roe. 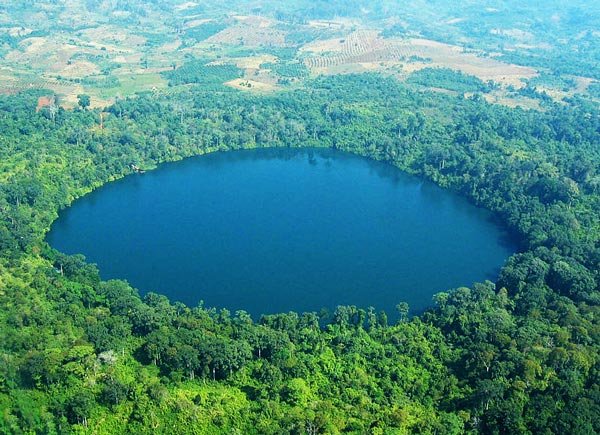 Ziros lake, or referred to as Ziros Lake, located east of Preveza and a potelei a monument of nature, the beauty of it is comparable lakes in Central Europe and North America.

To the west rise the Thesprotian mountains and very close to the east flows the river Louros with which it communicates underground. A little further north is the famous Kokkinopilos, a group of red clay hills of great geological and archaeological interest.

It is probable that Lake Zirou was “covered”, that is, it was a cave, the roof of which collapsed 10,000 years ago, forming today’s lake.

With a length of  900  meters and a width of 600, Lake Zirou creates a natural “mirror” with its waters, “enchanting” the visitor in a lush forest of thousands of species of flora and fauna, which compose an amazing setting of wellness, relaxation, activities and enjoyment. of the landscape. Lake Zirou is a peculiar park, which was not created by man, but by nature itself.

Its name is said to have Slavic origins, proving the medieval presence of various tribes in Epirus and highlighting the historicity of the wider region. The buildings of the former Paidopolis, located north of the lake, are a reminder of a turbulent period of Hellenism, which was the Civil War.

The Lake is an integral “page” of the local “book” of folklore and folklore, as the myth of two brothers and an angel (referring to Sodom and Gomorrah) is used to justify their creation, according to locals.

It is a fortification project, which was destroyed and built many times and stands on the cape between the beach of Valtos and the port of Parga to remind that Parga, apart from being a famous tourist resort, also had geostrategic importance over the centuries.

Today, the Castle built by the Venetians in the 16th century as the owners of Parga and the additional works made by Ali Pasha survive.

The first creators of the fortification were the Normans at the end of the 14th century and then the Castle followed the fate of Parga, which depending on the geopolitical conditions in the Mediterranean belonged to Venetians, Ottomans, French and English.

The Castle of Parga offered unique protection to the Souliotes in their long struggle against Ali Pasha, as they resorted there for supplies. They took refuge in the Castle and when they left Souli and in 1819 together with the other Parginians they left Epirus for good, in the famous uprooting, when Parga was sold to Ali Pasha by the English.

Inside the Castle, in addition to the paved entrance and an imposing iron gate, you can see houses and outposts, as well as old cannos.

The exhibition of the Museum concerns exclusively the findings of the archeological site of Nikopolis, it is structured in corridors and thematic units, while references are made to all the personalities (with the leading one of Sotirios Dakaris) who played a catalytic role in the promotion of the ancient city.

The visitor “travels” in time during his presence and his tour of the Museum, observing the historical “chain” of the city-symbol of the victory of Octavian in Aktio, which became a religious, cultural and administrative center of the time, but and declined.

The exhibition findings are unique, a fact that testifies to the historical and cultural richness of the area.

The Museum, with a total area of ​​2,150 sq.m., on a plot of 20 acres, located at the entrance of the city of Preveza, organizes scientific days, cultural events and educational programs in the context of the extroversion attempted by the Ephorate of Antiquities, creating a holistic lung of cultural development with the Museum itself as a point of reference.